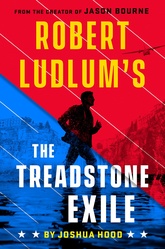 After the revival of Operation Treadstone, Adam Hayes has retreated to Africa, determined to leave behind the black-ops program behind for good. As a former Treadstone operative, Hayes knows just how destructive the program can be, as it turns government agents into nearly superhuman assassins. But his quiet life in Africa changes irrevocably, when, while attempting to complete a charitable mission, Hayes is attacked by extremists. Forced to make an unexpected landing, his plane is damaged and he is left in a hornet's nest of trouble.

In order to get back in the air, Hayes agrees to transport a passenger—Zoe Cabot, the daughter of a tech baron—to a small coastal city. But just after Hayes completes his flight, Zoe is kidnapped.

"Few thriller fans will be able to resist as the author hauls them by their necks down many rough roads while Hayes mows down the opposition. Hood is a master of action.”—Publishers Weekly