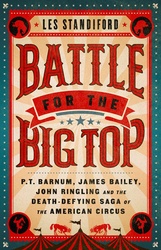 Battle For The Big Top: P.T. Barnum, James Bailey, John Ringling And The Death-Defying Saga Of The American Circus

Millions of Americans have sat under the “big top,” watching as trapeze artists glide and clowns entertain, but few know the captivating and cutthroat stories behind the men whose creativity, ingenuity, and determination created one of our country’s most famous pastimes.

In Battle for the Big Top, New York Times-bestselling author Les Standiford brings to life a remarkable era when three bigger-than-life characters--James Bailey, P.T. Barnum, and John Ringling--all vied for control of the vastly profitable and influential American Circus. Ultimately, the rivalry of these three showmen resulted in the creation of an institution that would surpass all intentions and, for 147 years, hold a nation spellbound.