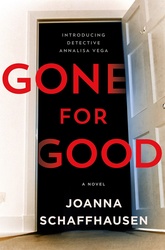 The Lovelorn Killer murdered seven women, ritually binding them and leaving them for dead before penning them gruesome love letters in the local papers. Then he disappeared, and after 20 years with no trace of him, many believe that he's gone for good.

Not Grace Harper. She believes the Lovelorn Killer is still living in the same neighborhoods that he hunted in. Detective Annalisa Vega lost someone she loved to the killer. Now she's at a murder scene with déjà vu: Grace Harper lies bound and dead on the floor, surrounded by clues to the biggest murder case that Chicago homicide never solved. Annalisa has the chance to make it right and to heal her family, but first, she has to figure out what Grace knew.

“Annalisa Vega is the detective you’ve been waiting for.”—Lisa Gardner