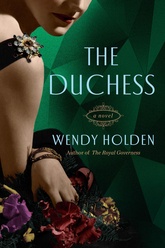 It's 1928 and a middle-aged foreigner comes to London with average looks, no money and no connections. Wallis’s first months in the city are lonely, dull and depressing. With no friends of her own she follows the glamorous set in magazines and goes to watch society weddings. Her stuffy husband Ernest’s idea of fun, meanwhile, is touring historic monuments.

When an unexpected encounter leads to a party with the Prince of Wales, Wallis’s star begins to rise. Wallis knows the fun and excitement can’t last. The prince will have to marry. The sudden death of George V seems to make this inevitable; the Prince of Wales is now King Edward VIII. When, to her shock and amazement, he refuses to give her up, her fairy tale becomes a nightmare.

“[A] novel that will stand the test of time. I loved it."—Heather Morris