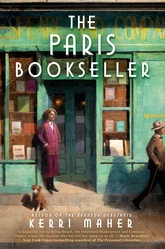 When bookish young American Sylvia Beach opens Shakespeare and Company on a quiet street in Paris in 1919, she has no idea that she and her new bookstore will change the course of literature itself.

Shakespeare and Company is more than a bookstore and lending library: Many of the prominent writers of the Lost Generation, like Ernest Hemingway, consider it a second home. It's where some of the most important literary friendships of the 20th century are forged—none more so than the one between Irish writer James Joyce and Sylvia herself. When Joyce's controversial novel Ulysses is banned, Beach takes a massive risk and publishes it under the auspices of Shakespeare and Company. But the success and notoriety comes with steep costs.

“A beautiful ode to Sylvia Beach, the renowned Shakespeare and Company owner, a real-life heroine who has left her mark on us all.”—Marie Benedict