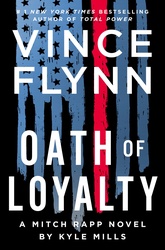 The killer is Legion

With the President convinced that Mitch Rapp poses a mortal threat to him, the CIA Director is forced to construct a truce between the two men. The terms are simple: Rapp agrees to leave the country for as long as Cook controls the White House. In exchange, the administration agrees not to make any moves against him.

This fragile détente holds until Cook’s power-hungry security adviser convinces him that Rapp has no intention of honoring their agreement. In an effort to put him on the defensive, they leak the true identity of his partner, Claudia Gould. As Rapp races to neutralize the enemies organizing against her, he discovers that a new generation of assassins is on her trail. A killer known to intelligence agencies only as Legion.