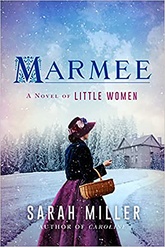 A mother pushed to the brink

In 1861, war is raging in the South, but in Concord, Massachusetts, Margaret March has her own battles to fight. With her husband serving as an army chaplain, the comfort and security of Margaret’s four daughters—Meg, Jo, Beth, and Amy—now rest on her shoulders alone. Money is tight and her husband sends less and less with no explanation. Worst of all, Margaret harbors the secret that these financial hardships are largely her fault, thanks to a disastrous mistake made over a decade ago which snatched away her daughters’ chances for the education they deserve.

Yet even with all that weighs upon her, Margaret longs to do more—for the war effort, for the poor, for the cause of abolition, and most of all, for her daughters.