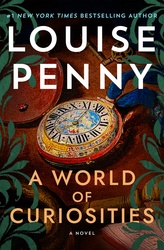 A World of Curiosities

It’s spring and Three Pines is reemerging after the harsh winter. But not everything buried should come alive again.

As the villagers prepare for a special celebration, Armand Gamache and Jean-Guy Beauvoir find themselves increasingly worried. A young man and woman have reappeared in the Sûreté du Québec investigators’ lives after many years. The two were young children when their troubled mother was murdered, leaving them damaged, shattered. Now they’ve arrived in the village of Three Pines.

Gamache and Beauvoir’s memories of that tragic case, the one that first brought them together, come rushing back. Did their mother’s murder hurt them beyond repair? Are those terrible wounds, buried for decades, now about to erupt?

“Virtuoso… blends nuanced characterization with nail-biting suspense…This tale of forgiveness and redemption will resonate with many. ” ―Publishers Weekly, starred review