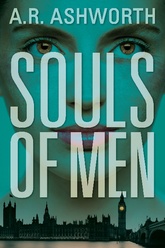 by A. R. Ashworth

When a teenage girl is brutally murdered in East London, veteran Detective Inspector Elaine Hope catches the case. Her superior suspects Peter Willend, a Texan ex-military surgeon and one of the last people to see the victim alive, but Elaine isn't so sure.

Now, Elaine is in charge of a bungled case and she's released the only suspect. As London's tabloids scream for a scapegoat, Elaine chases leads that entangle her in a web of secrets tied to a multinational criminal organization. As she tracks her prime suspect through wintery London boroughs, other hunters come out from the shadows.

Elaine's life gets even more complicated when Willend shows romantic interest, despite tragedies he won't reveal. But Elaine has secrets to match.