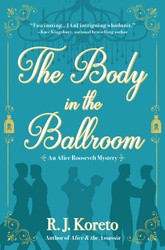 The Body in the Ballroom

The opportunity presents itself at a high-society ball where one man, detested by nearly all the partygoers, quaffs a decidedly deadly cocktail.

An African-American mechanic who’s a friend of former Rough Rider-turned-Secret Service Agent Joseph St. Clair is suspected of the murder-by-poison, but Alice is sure he’s innocent.

From downtown betting parlors to uptown mansions, Alice and Agent St. Clair uncover forbidden romances and a financial deal that may change the world. But neither Alice nor her would-be protector may survive the case at hand.

“I loved spending time with feisty Alice Roosevelt in her role as a sleuth.”—Linda Fairstein