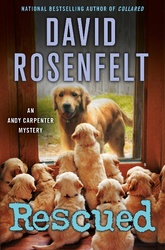 Andy Carpenter has a “ruff” time defending his wife’s ex

Defense lawyer Andy Carpenter would much rather spend his time working for his dog rescue organization, the Tara Foundation, than find himself back in a courtroom. However, when a truck carrying over 70 dogs from the south to the more rescue-friendly northeast turns up with a murdered driver, Andy and his faithful golden retriever can’t help but get involved.

Andy is eager to help the dogs, many of whom come to the Tara Foundation while they await forever homes. It’s the man accused of murder who he has a problem defending. The accused just happens to be his wife Laurie’s ex-fiancé—her tall, good-looking, ex-Marine ex-fiancé. Even with dozens of cases behind him, this one may prove to be his most difficult—win or lose.

“Rosenfelt has a solid formula, and the end result is like eating ice cream on a hot day—satisfying to the very end.”—Associated Press