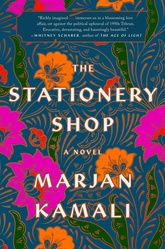 The overwhelming power of love

Roya is an idealistic teenager living in 1953 Tehran who finds a literary oasis in kindly Mr. Fakhri’s neighborhood book and stationery shop. When Mr. Fakhri introduces Roya to his other favorite customer, Bahman, she loses her heart at once.

A few short months later, on the eve of their marriage, Roya agrees to meet Bahman at the town square, but suddenly, violence erupts—a result of the coup d’etat that forever changes their country’s future. In the chaos, Bahman never shows. With a sorrowful heart, she resigns herself to never seeing him again.

Until, more than sixty years later, an accident of fate leads her back to Bahman and offers her a chance to ask him the questions that have haunted her for more than half a century.

"The unfurling stories in Kamali’s sophomore novel (after Together Tea) will stun readers as the aromas of Persian cooking wafting throughout convince us that love can last a lifetime. For those who enjoy getting caught up in romance while discovering unfamiliar history of another country." -Library Journal