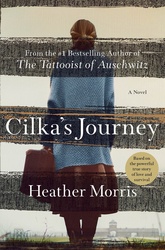 Her beauty saved her—and condemned her

Cilka is just 16-years-old when she is taken to Auschwitz in 1942, where the commandant immediately notices her beauty. Forcibly separated from the other women prisoners, Cilka learns quickly that power, even unwillingly taken, equals survival.

When the war is over and the camp is liberated, freedom is not granted to Cilka: She is charged as a collaborator for sleeping with the enemy and sent to a Siberian prison camp. In Siberia, Cilka faces challenges both new and horribly familiar. But when she meets a kind female doctor, Cilka is taken under her wing and begins to tend to the ill in the camp, struggling to care for them under brutal conditions. Confronting death and terror daily, Cilka discovers a strength she never knew she had.

Heather Morris is a native of New Zealand, now lives in Australia. In 2003, Heather was introduced to Lale Sokolov. Their friendship grew and Lale embarked on a journey of self-scrutiny, entrusting the innermost details of his life during the Holocaust to her. Heather originally wrote Lale’s story as a screenplay, before reshaping it into her debut novel, The Tattooist of Auschwitz