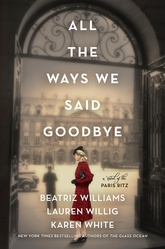 All the Ways We Said Goodbye

France, 1914. When the Germans move into their family’s ancestral estate, Aurelie discovers she knows the German Major’s aide de camp. Despite their conflicting loyalties, their friendship soon deepens into love, but betrayal will shatter them both.

France, 1942. As Daisy commits increasingly audacious acts of resistance for the sake of the country, she uncovers a devastating secret that will force her to commit the ultimate betrayal, and to confront the shocking circumstances of her own family history.

France, 1964. Hired to find a Resistance fighter turned traitor known as “La Fleur,” Babs investigation has led her on a journey of discovery that that takes her to Paris and the Ritz—and to unexpected places of the heart.