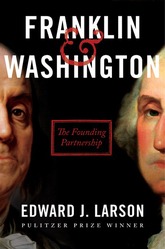 Theirs was a three-decade-long bond that, more than any other pairing, would forge the United States. Vastly different men, Benjamin Franklin, an abolitionist freethinker from the urban north, and George Washington, a slaveholding general from the agrarian south, were the indispensable authors of American independence and the two key partners in the attempt to craft a more perfect union. And yet their teamwork has been little remarked upon in the centuries since.

Illuminating Franklin and Washington’s relationship with striking new detail, Pulitzer Prize–winning historian Edward J. Larson shows that theirs was truly an intimate working friendship that amplified the talents of each for the collective advancement of the American project.

“In 1790, John Adams joked that the history of the Revolution would eventually boil down to Washington and Franklin doing pretty much everything. This was not as much of a joke as Adams imagined: Edward J. Larson’s elegantly written dual biography reveals that the partnership of Franklin and Washington was indispensable to the success of the Revolution.”—Gordon S. Wood, winner of the Pulitzer Prize for History and the Bancroft Prize; author of Revolutionary Characters and Empire of Liberty