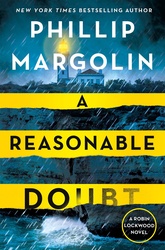 Robin Lockwood is a young criminal defense attorney who joined the firm of legend Regina Barrister not long before Regina was forced into retirement by early onset Alzheimer’s.

One of Regina’s former clients, Robert Chesterfield, shows up in the law office with an odd request―he’s seeking help in acquiring patent protection for an illusion. When Robin looks into his previous relationship with the firm, she learns that 20 years ago he was arrested for two murders, one attempted murder, and was involved in the potentially suspicious death of his very rich wife.

Now, decades later, he debuts his new trick―only to disappear at the end. Robin must unravel the tangled skein of murder and bloody mischief to learn how it all ties together.