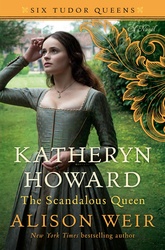 In the spring of 1540, Henry VIII, desperate to be rid of his queen, Anna of Kleve, first sets eyes on the enchanting Katheryn Howard. Although the king is now an ailing 49-year-old, his amorous gaze lights upon the pretty teenager. Seated near him by her ambitious family, Katheryn readily succumbs to the courtship.

Henry tells the world she is a rose without a thorn, and extols her beauty and her virtue. Katherine delights in the pleasures of being queen and the power she has to do good to others. She comes to love the ailing, obese king and tolerate his nightly attentions. If she can bear him a son, her triumph will be complete. But Katheryn has a past of which Henry knows nothing, and which comes back increasingly to haunt her.