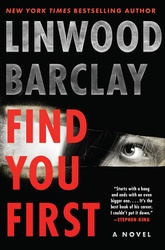 A deadly race against time

Tech millionaire Miles Cookson has recently been diagnosed with a terminal illness, and there is a fifty percent chance that it can be passed on to the next generation. Two decades ago, a young, struggling Miles was a sperm donor. Somewhere out there, he has kids--nine of them. As Miles begins to search for the children he’s never known, Chloe Swanson embarks on a quest to find her father with the knowledge that 22 years ago her mother used a sperm bank to become pregnant.

When Miles and Chloe eventually connect, their excitement at finding each other is overshadowed by a series of mysterious and terrifying events. One by one, Miles’s other potential heirs are vanishing--every trace of them wiped, like they never existed at all.

“[S]tarts with a bang and ends with an even bigger one…It’s the best book of his career.” —Stephen King