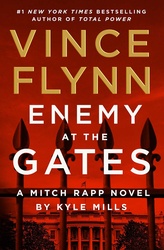 Enemy at the Gates

Mitch Rapp has worked for a number of presidents over his career, but Anthony Cook is unlike any he’s encountered before. Cunning and autocratic, he feels no loyalty to America’s institutions.

Meanwhile, when Kennedy discovers evidence of a mole scouring the Agency’s database for sensitive information on Nicholas Ward, the world’s first trillionaire, she convinces Rapp to take a job protecting him. In doing so, he finds himself walking an impossible tightrope: Keep the man alive, but also use him as bait to uncover a traitor.

As the attacks on Ward become increasingly dire, Rapp and Kennedy are dragged into a world where the lines between governments, multinational corporations, and the hyper-wealthy fade.

“[If] you think you’ve already seen Kyle Mills at his best...think again. This one is not to be missed.”―The Real Book Spy