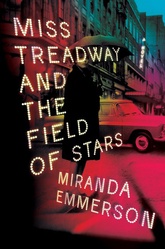 Miss Treadway and the Field of Stars

Has this actress taken her final bow?

In 1965, American actress Iolanthe Green is the toast of the West End. Charismatic, mysterious, and beautiful, she brings glamour to the scuffed boards of Soho's Galaxy Theatre. Then, after a rapturously received performance, Iolanthe walks through the stage door-and vanishes.

London is riveted as Fleet Street speculates about her fate. But as the case grows colder, the public's interest fades. Only Anna Treadway, Iolanthe's dresser at the Galaxy, is determined to solve the mystery.

A disparate band of London émigrés-an Irish policeman, a Turkish coffee-house owner, and a Jamaican accountant-joins Anna in an odyssey that leads them into a netherworld of jazz clubs, backstreet doctors, police brutality, and seaside ghost towns.

"Fabulous depiction of a London where the ‘Swinging Sixties' hides a darker...story of prejudice and struggle. I loved the strong women and evocative writing from an author offering more questions than clues."-Helen Simonson, author of Major Pettigrew's Last Stand