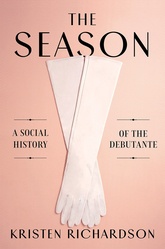 The Season: A History Of The Debutante

The reality of debutantes

Kristen Richardson, from a family of debutantes, chose not to debut. But as her curiosity drove her to research this enduring custom, she learned that it, and debutantes, are not as simple as they seem.

In The Season, Richardson traces the social seasons of young women on both sides of the Atlantic, where debutante daughters of Gilded Age millionaires sought to marry British aristocrats. She delves into Jazz Age debuts, carnival balls in the American South, and the reimagined ritual of elite African American communities, which offers both social polish and academic scholarships.

While exploring why the debutante tradition persists, Richardson has uncovered its extensive cultural influence on the lives of daughters in Britain and the US.