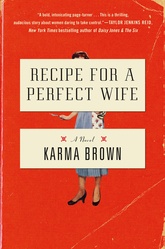 Recipe for a Perfect Wife

A woman discovers her future in the past

When Alice Hale leaves a career in publicity to become a writer and follows her husband to the New York suburbs, she is unaccustomed to filling her days alone. But when she finds a vintage cookbook in the basement, she becomes captivated by the cookbook’s previous owner—1950s housewife Nellie Murdoch. As Alice cooks her way through the past, she realizes that within the cookbook’s pages are clues about Nellie’s life—including a mysterious series of unsent letters penned to her mother.

Soon Alice learns the recipes may seem harmless, Nellie's secrets may have been anything but. When Alice uncovers a more sinister side to Nellie’s marriage, she begins to take control of her life and protect herself with a few secrets of her own.

"[Brown] excels at bringing the complexities of women’s lives to the page, and her latest novel questions how much has really changed for women over the last 60 years. The pacing is brisk, the characters are appealing, and both time lines are equally well realized. Thoughtful, clever, and surprisingly dark."—Booklist

"Brown skillfully alternates between Alice's modern world and Nellie's in the 1950s. With plentiful historical details (including recipes and depressingly hilarious marriage advice), the pages devoted to Nellie come to life. . . . An engaging and suspenseful look at how the patriarchy shaped women's lives in the 1950s and continues to do so today."—Kirkus